OGMO is another editor written in C#. The main focus is tile based editing, but it supports a free form entity layer. This is a Pingus level imported into OGMO: 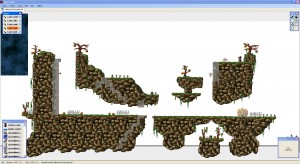 Editing and scrolling a level becomes very slow, even in small levels. To be fair, though, the entity layer is good enough for placing enemies and traps. Changes to the project definition require levels to be closed and reloaded. It is possible to attach custom data to levels and sprites.

OGMO writes project and level data in XML format that is easy to read and write. One thing to watch out for is that the file format uses localised floating point format, so an international team with mixed locales may run into problems when exchanging levels. The rotation origin seems to be the unscaled origin, and scale is the top left corner.

There doesn’t seem to be any written documentation and at the moment the website only contains a few tutorial videos, so a lot of the user interface needs to be explored by trial and error. 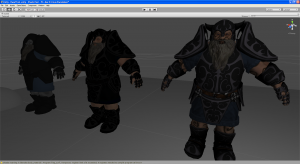 This is a first experiment to import layered textures from Blender into Unity3D. This still uses the default Unity3D lighting function, but combines the texture layers that are on the Blender shader. The left dwarf is imported with the default exporter, the middle dwarf uses the improved exporter I am working on, and the right dwarf uses an improved material importer.

To compare, this is the dwarf rendered in Blender. 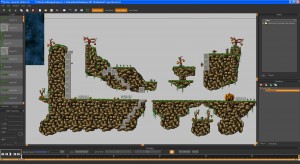 DAME is a level editor developed on the Adobe Air platform. Air gives it cross-platform compatibility but seems to require quite a lot of CPU performance. Many of DAME’s features are for editing tile based or isometric maps but it is possible to edit free form layouts as well. This is a Pingus level in DAME using sprite layers: 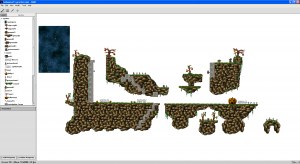 Zooming out is disabled by default and enabling it can break map rendering. Air renders everything through the Flash player which seems to eat up quite a bit of rendering performance. It uses custom UI widgets which look and feel slightly different to the platform default widgets.

DAME uses an XML based file format that is easy to read and write, you can attach custom properties to sprites, and you can set a scroll factor on each layer to preview parallax effects. Sprites can be animated and can have per-frame collision data. It is possible to group the sprite information into folders to make it easier to find specific sprites. DAME uses Lua to implement custom level exporters.

R.U.B.E is an editor designed to edit scenes for the Box2D physics engine, but it is flexible enough for general level editing. So this is a Pingus level in R.U.B.E: 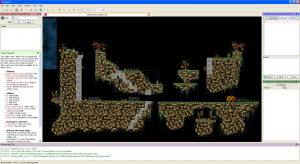 R.U.B.E is very fast, but feels very low level. I don’t like that editing different elements requires mode switches and that some functionality is only bound to keyboard shortcuts, but that probably makes it very fast to use once you’ve learned them. Some of the editing keys feel familiar from Blender, so a Blender user may be at an advantage. R.U.B.E embeds AngelScript as a scripting language to extend and customise the editor.

It would be useful to be able to organise a scene into different layers. Similar to Inkscape I am missing some kind of library to store reusable gameplay elements, but this could probably be implemented using the scripting language.

The file format is designed around the Box2D runtime, but with a bit of work it is possible to use it in a different engine. It is a JSON document that can be easily accessed from many programming languages. 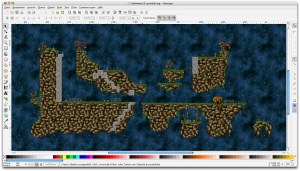